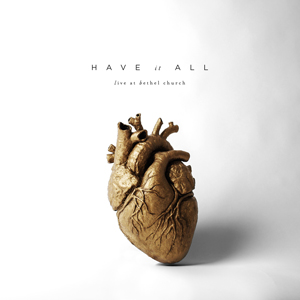 The album is the first live recording at Bethel Church since 2012’s For The Sake of The World, and features Brian and Jenn Johnson, Jeremy Riddle, Steffany Gretzinger, Amanda Cook, William Matthews, Jonathan Helser, Paul and Hannah McClure, Kalley Heiligenthal, Josh Baldwin and Bethel newcomers Leeland and Cory Asbury.For everything there is a season, a time for every activity under heaven.” —Ecclesiastes 3:1 (NLT)

Like the seasons, our lives tend to evolve in a never-ending pattern of equal parts: rain and sun. It’s the way we grow, both physically and spiritually. Just as winter turns to spring, our lives shift from cold and dark to bright and beautiful once again. For Bethel Music, life’s seasons—both good and bad—tend to be a recurring theme. The collective of creatives based out of Bethel Church in Redding, California, share in each other’s experiences as they drink deeply from the well of community forged from decades of worshipping and living life together. Over the course of the past several years, the worship leaders who call Bethel home have walked through seasons of loss, grief, joy and victory, not only as a body of believers but as friends who feel like family. Turning those seasons into songs, the group created the blueprint for their latest live recording, Have It All.

“When you’re friends with all these guys, and you know what they’ve walked through…and then a song comes out of that season, there’s always a backstory to it,” says worship leader Brian Johnson. “We all had similar things happen—whether good or bad—and this album goes to show that we all made it through the journey and we have something to show for it in the form of a song.”

A power-packed two-disc set, Have It All is the first live recording at Bethel Church since 2012’s For The Sake of The World. The 14-track album captures the passionate worship at Bethel’s weekend services, and features songs led by names quickly becoming synonymous with modern worship, including Brian and Jenn Johnson, Jeremy Riddle, Steffany Gretzinger, Amanda Cook, William Matthews, Jonathan Helser, Paul and Hannah McClure, Kalley Heiligenthal, Josh Baldwin and Bethel newcomers Leeland and Cory Asbury. All songs are loaded and ready to use- just access your WorshipTeam.com system database.