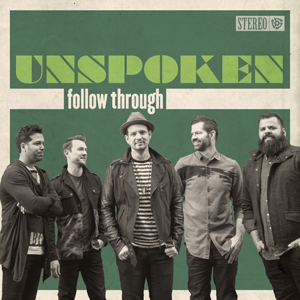 With the release of Follow Through, Unspoken has found a place of new freedom to push the boundaries of their trademark sound, mixing in horns and electronic elements in fresh ways without altering the core of their musical identity. Follow Through evidences a forward leap of artistic evolution from the last record, blending hip hop, soul, pop and folk influences to tell the story of the season of life the band members have found themselves in over the last couple of years.

Band members Chad Mattson, Jon Lowry and Mike Gomez co-wrote every song on the album, as the record delivers the heartfelt lyrics and singable melodies the band is known for. Then add the smooth, soul-edged pop vocals of lead singer Mattson, the complex vocal harmonies of Gomez and Lowry, to the skilled musicianship of drummer Ariel Munoz and new band member, keyboardist Don Eanes.

There will be two versions of the album with all new, original songs. The standard edition will feature 10 songs and will be available at all digital and retails outlets. The deluxe edition, exclusively available at Lifeway stores, all digital outlets and at the band’s concerts, will feature 14 songs with “Sleep In The Storm,” “Can’t Deny Your Love,” “Roots” and “Solid Rock” that are only available on this version of Follow Through.

“If you’ve been around the Unspoken guys at all, you know they’re some of the funniest people you’ll meet. But when it comes down to writing and recording a record, they get very serious,” explains John May, Vice President of A&R, Centricity Music. “I’m grateful for the months of work each one of them poured in to getting the songs, the sound and the story of this record right. From the very first song written to the last round of mastering, every note of this record expresses some portion of the care and love the guys feel for their fans, and their commitment to the One who makes the music possible.”

“I had felt burned out for a while,” admits Mattson, “like I didn’t have anything left to give. The whole process of the last few years had just worn me down. I feel like this record is kind of a resurrection. And with the title track being ‘Follow Through,’ the theme of finishing as strong as we did in the beginning has emerged. I think this new album represents a fresh beginning for us spiritually and musically.”