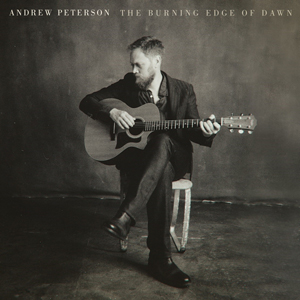 One of Christian music’s most prolific and thought provoking singer-songwriters will release his latest Centricity Music project, The Burning Edge of Dawn, October 9th. The album features 10 new songs written by Peterson between February and May 2015, with his longtime friend, producer Gabe Scott (Crowder). The process of making this record was a departure for Peterson, since most of the songs were written during the recording process. Having just completed writing The Warden and the Wolf King, the final book in the award-winning Wingfeather Saga series, Peterson began the project without a handful of songs in his pocket.

“Most of these songs didn’t exist about six months ago,” explains Peterson. “Usually I’ll piece together an album from songs I’ve written along the way, but this time I went into the studio with about a song and a half, looked at Gabe (the producer) and said, ‘Well, here goes nothing.’ It meant that I had no choice but to write about exactly what’s happening in my life right now, in real time. And what’s happening is that I’m seeing the first glimmers of sunrise after what feels like a long, painful night. These songs are about joy.”
These joyful songs deliver the heart-rending lyrics that Peterson fans have always enjoyed. The Burning Edge of Dawn launches with the powerful song, “The Dark Before The Dawn”: I’ve been waiting for the sun/To come blazing out of the night like a bullet from a gun/Till every shadow is scattered, every dragon’s on the run/Oh, I believe, I believe that the light is gonna come. Two of the songs are written for two ladies in his life, his wife, Jamie (“My One Safe Place”) and his daughter, Skye (“Be Kind To Yourself”). “The Rain Keeps Falling” features singer/songwriter Ellie Holcomb, and two of the songs include background vocals from his friend Caleb Chapman, of the band Colony House. All songs are loaded and ready to use- just access your WorshipTeam.com system database.