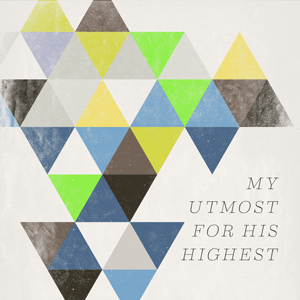 Each new song on My Utmost for His Highest correlates with a specific passage from the bestselling daily devotional. The GRAMMY®-winning brothers that comprise for KING & COUNTRY are joined by their sister, acclaimed artist Rebecca St. James, on a contemporary version of timeless hymn “Amazing Grace.” Big Daddy Weave teams up with Francesca Battistelli for “Lavish.” New artists Hollyn and Chris McClarney unite for “There’s a Hope”; and Unspoken and Blanca join forces for “Light That Never Fades,” among other high-profile collaborations.

In addition, other highlights include Lauren Daigle’s exclusive acoustic version of “Power To Redeem,” and We Are Messengers’ powerful rendition of “My Victory,” a song co-written by the group’s front man Darren Mulligan and originally recorded by Crowder.

A century after his death, Oswald Chambers continues to guide countless people on their journey to knowing God better through My Utmost for His Highest, first published in 1935. With more than 13 million copies in print, the classic devotional transcends generations with its timeless truths.

p.s. if you have never tried out Worshipteam.com, try it FREE for one month by simply going here: https://www.worshipteam.com/try ! See you there.