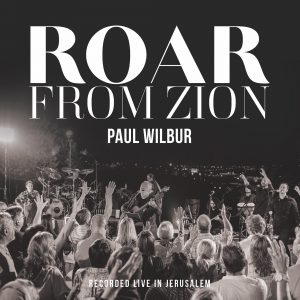 [2019 Release]
Preeminent messianic worship leader and Dove Award nominee, Paul Wilbur, who has sold over three million albums globally, released Roar from Zion through his newly formed partnership with Venture3Media (V3M) The 14-track album, is a live worship experience recorded at The Pavilion in the heart of Jerusalem, Israel during the Feast of Tabernacles and the 70th anniversary of the rebirth of the State of Israel. The album features Wilbur along with internationally known recording artist and Los Angeles-based TV Host Shae Wilbur. Roar from Zion also features Joshua Aaron, Sarah Liberman, Beckah Shae, Ryan and Marie Hodges and a world-class band made up of both Israeli and Arab instrumentalists and Nashville-based musicians.

“The music invites the King to Roar from Zion and Thunder from Jerusalem!” exclaims Wilbur, referencing the Old Testament prophet Joel (Joel 3:16). “These are songs that declare the Kingdom that is coming, and the glory of the King!”

Roar from Zion further includes the sounds of the Nashville String Machine with orchestrations by Paul Mills, and an Israeli choir made up of young Christian Arabs, Messianic Jews and Christians from all over the globe. The resulting album is a unique, Middle Eastern-inspired recording that sounds simultaneously ancient and fresh with songs that are sung in English with some phrases in Hebrew.

“We believe these sounds will ignite the heart of the Church world-wide for the restoration of Zion, the spiritual foundations of the Church,” adds Wilbur. “Roar From Zion offers new dynamic songs of praise and worship to present before the King of all kings! Lion of Judah…ROAR!”

Following the release of landmark albums such as Shalom Jerusalem, The Watchman and Jerusalem Arise! that have helped shape the worship of Messianic and Evangelical churches and congregations around the world, Roar From Zion is comprised mostly of original compositions along with brand new recordings of Wilbur’s fan favorites “Days of Elijah” and “Adonai.”