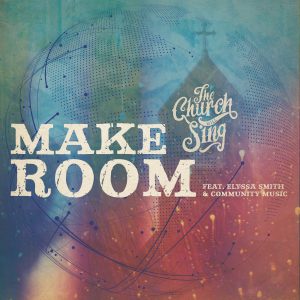 The Church Will Sing has released “Make Room” featuring Elyssa Smith & Community Music through Curb | Word and the song is now loaded into WorshipTeam.com “Make Room” is a recording of a great new song

Penned by Community Music’s husband and wife worship leaders, Lucas Cortazio and Evelyn Heideriqui along with Nashville based writers Josh Farro (formerly of Paramore and co-writer of “This Is Amazing Grace,”) and Bekah White; “Make Room” is a prayer for God to take the place that is rightfully His in our lives.

The Church Will Sing, incorporates churches from all around the United States as the featured vocal of it’s songs. Volume 1 was the home for several church anthems including “Even Louder”, the collaboration between Bethel Music’s Tony Brown, Housefires Jonathan Jay, and Word Music’s Matt Armstrong and Benji Cowart. After the initial “The Church Will Sing” release it was later recorded by several worship leaders as well as hip hop artist Steven Malcolm featuring Natalie Grant. There is great anticipation for Volume 2 which is being recorded now.