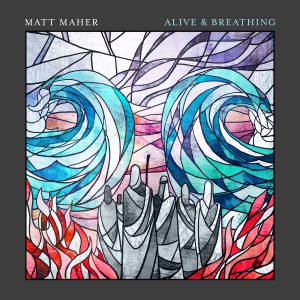 Celebrated singer/songwriter and worship leader Matt Maher offers the culmination of his Alive & Breathing series, blending new studio offerings with live performances of classic hits, including “Lord, I Need You,” “Soul On Fire,” “Come As You Are,” plus the powerful title track, and more.

David Leonard has released “The Wait” through Integrity Music and all songs are now loaded into WorshipTeam.com “The Wait” is a studio recording of some great new songs.

In early 2017, singer, songwriter and worship leader David Leonard was in Los Angeles for a career pinnacle, walking the red carpet as a GRAMMY® Awards nominee for his work with acclaimed worship duo All Sons & Daughters. It was a professional high during a personal low for David who was struggling through a season of anxiety, depression and heartache amidst questions and unanswered prayers. Hoping for clarity, he headed out the next day on a solitary, soul-searching road trip home to Tennessee.

It was late into his first night and he was driving through the desolate Mojave Desert when he began to see a light in the distance. At first, he thought he was nearing a city but realized as he drove closer, it was the moon breaking over the horizon and heralding what would be a breakthrough for him. “I felt like God just threw on this big flashlight and said, ‘I see you’,” he recalls. “I immediately felt acknowledged and seen.”

What David had thought would take an entire journey, happened in the first night with that moment turning out to be the moment he was longing for. With still so many stops to make along the way and despite the still unanswered prayers, he was already filled with life. It was a welcome reprieve following a seemingly endless wait.

“Everybody says ‘you’ll find God in the Grand Canyon’… and I did,” he says of the cross-country trek. “It was a sweet time, but it was nothing like when He met me in the desert.”

Back home and with a renewed sense of peace, David set out to creatively remain in the background as he wrote and produced from his studio near Nashville and All Sons & Daughters ended their season of recording and touring together. All the while, he continued working through the issues that had plagued him, including the bitter road of infertility that he and his wife had been walking. Along the way, he noticed that his experiences were surfacing in the songs he was writing for other artists. And those songs had begun weaving together his own story of heartache and redemption that would eventually become The Wait (Integrity Music), his first solo album in an almost two-decade career.

“I started looking over all these songs I’d been writing with other people, and thought, ‘These are my songs,’” Leonard recalls of realizing he’d unintentionally penned the album. “I wrote this record feeling no pressure to have to create some grand thing. I just got to write and have fun and enjoy it; and then all of a sudden, I had a record. As a writer, it was a really freeing place.”

Sonically, the album is a departure from the organic, acoustic-driven melodies that made All Sons & Daughters so beloved. Instead, The Wait feels like a beautiful combination of all three of David’s previous bands – – Jackson Waters, NEEDTOBREATHE and All Sons & Daughters.

“I think it’s going to catch people off guard,” he admits, “and that’s a good thing. It would’ve been a lot easier if I’d just made another All Sons & Daughters record, sonically. There was that worry of thinking, ‘If you want to succeed, you should just do what you’ve been doing.’ But that didn’t feel right to me. I knew I needed to do what the record was calling for and go in a different direction. There’s a playful side to me and I’m excited for people to see it.”

Lyrically, The Wait doesn’t stray from the vulnerability of David’s previous work. If anything, the collection’s 13 tracks are even more transparent, the themes more universal—all born out of personal experience. “I’ve always been the kind of guy who’s not afraid to talk about the things he’s walking through,” he says. “I don’t know if this is a Sunday morning record… maybe it’s more of a weekday record. But it is for worshipers. It’s for anyone who’s been in that desert place looking for signs of life.”

Still, some of the songs have already resonated with David’s home congregation, Journey Church, as he’s led them on Sunday mornings. The confessional “Know Your Heart” seeks to fully explore the heart of God, while the Psalm-like “You Know Me” ponders how a perfect God could possibly love His fallible children.

Meanwhile, “I Will Wait” chronicles the Leonards’ battles with infertility. After many years of prayerful waiting, daughter Ella Kate was born. Then, the couple experienced more waiting and a devastating miscarriage before finally welcoming their newest addition, daughter River, whose name is joyfully written into the song’s second verse: “Oh, the burdens that I’ve carried. They are heavy, oh too heavy to hold. But there’s a River. There’s a sunrise. There’s a new day and it’s bringing new life.”

“It’s the struggle of the wait,” David says of the track. “Every month for four years was a constant letdown and disappointment and probably the hardest thing my wife and I had ever walked through.”

“Share The Burden” timestamps the moment the couple knew they needed help in the midst of their journey and speaks to the greater need for community by everyone, no matter the nature of our burdens. The couple set out to intentionally find others to support them through their never-ending grief, and that network of people made all the difference.

Like many prolific songs do, lead single “Threads” came at the eleventh hour. After the record was finished, a candid conversation over breakfast with fellow songwriters Ethan Hulse and Andrew Ripp, led to the birth of the textured track. “The idea was just the unraveling of who we are and who we think we should be and what God has for us,” David explains. “In the grand scheme of things, the more we can surrender, and the more we can turn ourselves off, the better. Our unraveling is spurred by fear; it’s spurred on by anxiety, but then it’s wrapped up in a love that casts out all those things.”